This past weekend I went with the elders of White Fields Church to Allenspark, where we had a marathon of meetings, but in such a beautiful spot that we could also enjoy some hiking and the natural beauty of the Rocky Mountains.

Tight Squeeze into the “Hidden Room”

We had a great time together, but I was surprised how exhausted I felt at the end of it. However, I feel very encouraged about where our church is at and where we are going.

Speaking of exhaustion and encouragement: the US election is coming up in 3 days.

I’m exhausted by the campaigns, by the division it causes, I’m exhausted because both of the major party candidates have major character flaws and neither of them are someone I can be excited to vote for.

However, I am also hopeful. Yesterday I ran across an article by Carey Nieuwhof that was a breath of fresh air. True, he’s a Canadian, so he doesn’t really have any skin in the game, but then on the other hand, they have Justin Trudeau and pretty much all of the things conservative Americans are concerned about happening in the US have already happened in Canada – so maybe a Canadian is the exact person who can speak into our situation.

Here’s the article: Despairing about the US Presidential election? 5 predictions that point toward hope.

Here are the 5 predictions he gives:

Carey expounds on each of these in his post – it’s worth reading, but the tone of what he is saying is something I have found curiously lacking from Christian leaders during this election season.

I, for one, cannot lose hope – because as a Christian I know that 1) God is sovereign and 2) the best is yet to come.

This past weekend was a busy one for us, full of many good things.

It began on Saturday with the Longmont Sunrise Stampede. My wife and 8 year old son ran the 2 mile race, and I ran the 10k. On the one hand, we were excited to run a race here in Longmont, but an added bonus was that the race went to support a great cause: proceeds went to help fund special education in the St Vrain Valley School District.

I was proud of my son for finishing his first race, and getting a time he could be proud of.

I finished my 10k race in 54:51 which was a personal record time for that distance and even better than I had hoped to do.

We then went up to Bailey, to a picnic for pastors and their families put on by Crossroads Church of Denver, my old church which sent me to Hungary.

We then went to Denver for the Lego BrickFest, which our kids loved, and then finished the day by having dinner with family and friends.

On Sunday we had church. I taught on Colossians 3:1-11 in a message titled “A New You”, about which I got a surprising amount of positive feedback. One of the key concepts I discussed was the “Already… but Not Yet” nature of the gospel. If you’d like to listen to it, you can find the audio of that message here.

I got an email after church that a couple from Texas had been at church that day, and that they had come because they read this blog and were in the area! That encouraged me to be writing here more.

Right after church at White Fields, we went down to Littleton, where the Colorado Hungarian community was having their annual picnic for Szent István (St. Stephen) Day. István was the first king of Hungary, who after converting to Christianity as an adult, established Hungary as a Christian kingdom in 1000. He was declared a saint on August 20, 1083 and because of that, August 20 is the national holiday of Hungary.

At this picnic, I lead a church service in Hungarian for the Hungarian Reformed Church of Denver, at which I preached on one of my favorite scriptures, Matthew 13:44 – “The kingdom of heaven is like treasure hidden in a field, which a man found and covered up. Then in his joy he goes and sells all that he has and buys that field.” I really enjoyed preaching in Hungarian again! I get to do it sometimes when I visit Hungary, but felt great to do it here in Colorado.

On Sunday night, I left home at 11pm with two friends from church to climb Longs Peak.

It was the 2nd time I’ve climbed it, and it was just as beautiful and difficult of a climb as I remember it being! It’s a 15 mile round trip hike, with 5100 feet of elevation gain. The most difficult part of the hike, mentally, is the last 2.5 miles, when you descend back into the forest and it feels like it will never end. The most technically difficult part is probably “The Trough.” Here’s a description of the route.

Today the kids went back to school, which is bittersweet for us as parents. On the one hand, we are going to miss having them around, but on the other hand, it was a lot of work keeping them occupied and on task at home, and we see how good it is for them to be with the other kids and learning.

We took a trip last week up to the Mount Evans as a family to celebrate the end of summer vacation. It was my wife and kids’ first time up above 14,000 feet.

I can’t get enough of these Rocky Mountains…

Yesterday was our final full day in Ukraine. We spent the day running errands and going around with Ben to look at different properties the church in Svitlovodsk has their eye on to purchase.
As part of our support of the ministry there, White Fields donated towards their building project. They currently meet in a 50 square meter (500 square foot) space in an office building, with a few extra rooms for children’s ministry. They estimate that for 60,000 USD they should be able to either buy land and build something from scratch or buy and refurbish a building. Pray for them in this regard.
In the evening we held part 2 of the Work as Worship seminar. Travis taught and then he and I fielded questions on the topic. It went really well and I think that we could easily fine tune this seminar and present it elsewhere. It is a topic which affects all people but something evangelical Christians fail to teach on enough – or to give a comprehensive enough vision for. I look forward to how we might be able to bring this teaching to our church in Longmont.

Right after the seminar ended, Levi, the assistant pastor and worship leader, drove Travis and I to Boryspil, where we stayed at a hotel near the airport, and then at 3:30 we woke up and got to the airport by 4:00am.

We had a 5 hour layover in Frankfurt, so we took atvantage of the great public transport here and went into the city. If you’ve been to Frankfurt, you know that there’s not a whole lot to see, so that was plenty of time.

Right now we are in the airport waiting for our flight to Denver. It’s been an extremely fruitful trip, but it will be great to be home.

Here are a few pictures from yesterday and today:

Today we spent the day in Kremenchug and then in the evening we did our first session of the Work as Worship seminar at Calvary Chapel Svitlovodsk.

The seminar was well attended and the Q&A drew many thoughtful questions.

I am looking forward to seeing how this seminar, as well as the one on Christocentrisity which Ben and I taught at the Pastors and Leaders Conference in Kyiv, can be shared in other places, including our church in Longmont.

The past few days have flown by in a blur. On Friday Jani and Tünde arrived to Kyiv from Eger and then we headed out the the Calvary Chapel Ukraine Pastors and Leaders conference which was held at a very nice Christian conference center in Irpen, just North-West of Kyiv. There were also pastors in attendance from Belarus and Moldova, almost 40 in total.
Ben Morrison and I taught the conference on the topic of Christocentric preaching, and our focus was on explaining why it's important to preach that way and how to do it. Let's just say, the weekend and the material was nothing short of revolutionary for these pastors, and I can see how God is going to use this approach to shape this movement going forward. It was so good that I plan to make sharing this approach a priority in the US and wherever else I will have the opportunity to do so.
One of the pastors in Ukraine, in the city of Kharkiv, is the nephew of a lady at White Fields, so it was great to connect. Additionally, the pastor who came up from Moldova is an old friend of my wife and I, and it was great to catch up with him and hear what the Lord is doing there.
After the conference, Travis and I drove with Ben and Levi to Svitlovodsk, and this morning I taught at their church service. The people are very open and responsive to the Gospel and I was able to see many of the people I had met on my trip last year.
In the evening we did a men's fellowship at the Banya (Russian sauna) and had a great time.
Tomorrow evening and the following evening Travis and I will be teaching a seminar on Work as Worship, so please pray that goes well.
Here are some photos of the conference and church today: 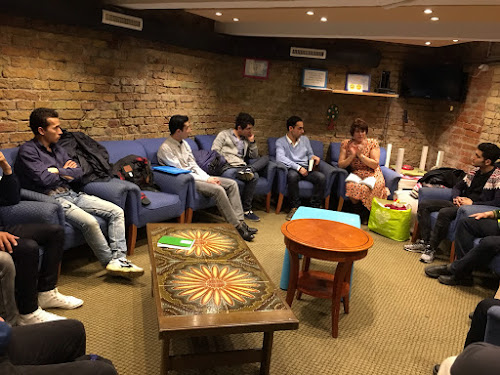 This past weekend I took my family (all except 1, who had to work) to Steamboat Springs for a short holiday.

I’d always wanted to go to Steamboat; apparently it is the place where I took my first steps when my parents were visiting my aunt who lived there, but of course, I don’t remember that, so it was all new to me.

On the way up, we stopped in Kremmling to see a bit of my family’s history. My Great Grand Uncle (my Grandmother’s uncle) was the town blacksmith for Kremmling until the 1970’s when he died. His old shop still stands in the center of town, with his name still painted on it.

The building is a historical building here in Colorado. Here’s a picture of it from the Denver Public Library’s archives.

In Steamboat we took our baby for her first hike, then went to the outdoor hot springs at Strawberry Park. I have been to a lot of natural hot springs in Europe, but I have to say that I have never been to one with this much character anywhere in the world. As we were there, an elk came down to drink from the spring. It was a great experience.

The next day we went downtown to see the Yampa River, and as we were walking we could smell sulphur, and realized that there were a bunch of natural springs coming right out of the ground, just about everywhere. Some of them were marked, some of them weren’t.

We found a great coffee shop: The Ristretto Lounge, which we would recommend to anyone going to Steamboat to check out.

I spotted this Trabant car on Hover street in Longmont today.
If you aren’t familiar with the Trabant, it is a masterpiece of East German engeneering, still common on the roads of Eastern Europe. The Trabant was the true “people’s car” for those in the eastern block.
This is only the second time I’ve seen one in the US, and the first one I saw didn’t run – this one seemed to run well and had Colorado plates – and a DDR sticker on it. I’d be curious to know the story behind how this guy got it over here.