I have been in Israel for the past week with a group from White Fields and Calvary Chapel Brighton. 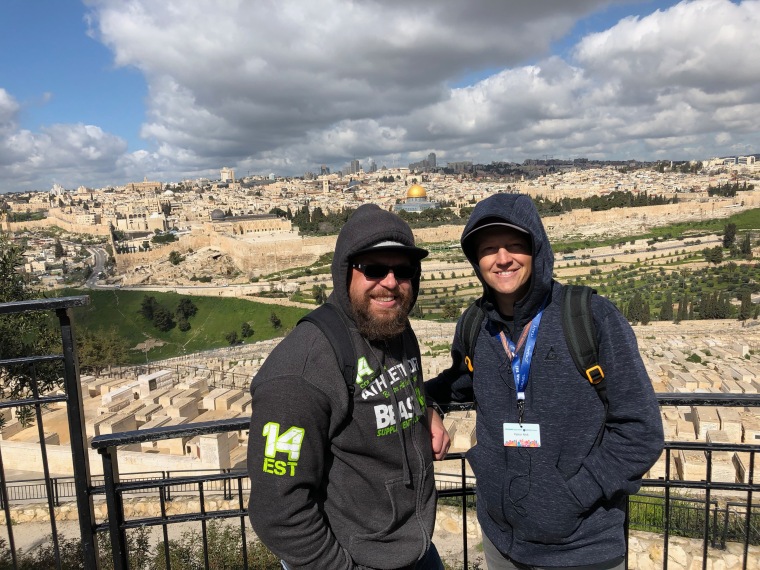 We spent the beginning of our trip on the coast, visiting Joppa and Caesarea, both important sites in the Book of Acts, and then headed up to the region of Galilee, where Jesus did the majority of his ministry. Then we drove to Jerusalem, following the Jordan River, and passing places such as Gilgal (see Joshua 4) and the site of Jesus’ baptism and the wilderness where he was tempted directly afterwards.

After seeing some important places in Jerusalem, including the Mount of Olives, the Garden of Gethsemane, the southern steps of the Temple and the Western Wall, we spent a day at the Dead Sea, visiting the place where Jesus was baptized in the Jordan River, seeing En Gedi where David hid from Saul in 1 Samuel 24, and going to Qumran where the Dead Sea scrolls were found and where John the Baptist was likely connected.

We will conclude the trip by visiting the Pool of Bethesda (John 5), following the way of the cross to Golgotha and seeing the garden tomb.

The trip has been incredible. I have particularly enjoyed getting the lay of the land and realizing the distances between places, and what they look like. Praying in the Garden of Gethsemane and standing where the church was born on Pentecost have been incredible experiences.

Why Should Christians Visit Israel?

Someone jokingly suggested that the benefit of visiting Jerusalem is that you can get the “before and after effect”: when the New Jerusalem comes (see Revelation 21), you will be able to compare it with the Old Jerusalem and see how much it’s improved! (Personally, I hope they clean up the Muslim Quarter a little bit…)

Interestingly, there is a neighborhood in Jerusalem called “New Jerusalem”. I went there, and it was nice, but not “streets of gold” nice. I’m looking forward to the real thing 🙂

All joking aside, there is one key reason why it is beneficial for Christians to visit Israel: Because, out of all world religions, what makes Christianity unique is that our faith is not based on abstract concepts, but on historical events which either happened or they didn’t.

What you learn from a tour of Israel, is that the New Testament accounts stand up to scrutiny. The New Testament talks about real places and real people and real events which had many witnesses, and which have been verified by archaeologists and historians. As Paul the Apostle said: “These things were not done in a corner!” (Acts 26:26)

In fact, because archaeology is a relatively young science, archaeologists are uncovering new findings all the time, and their findings corroborate rather than contradict New Testament accounts.

A visit to Israel is helpful for Christians, because it builds your faith in the historical events upon which Christian faith is based. This has been my first trip to Israel, but I expect it won’t be my last.

2 thoughts on “Why Should Christians Visit Israel?”