In Exodus 34, we read an interesting story: when Moses went to meet with God on the mountain to receive the tablets of the 10 Commandments, it caused Moses’ face to glow.

It says that when he came down from the mountain, the people were frightened to see his face glowing. In another place we are told that they couldn’t look upon it, because the glow was so bright.

Now, think about it: If the reason Moses covered his face was for the sake of the people, so as not to blind them by the glow on his face, then why let them look at his face first, and only then cover it up until the next time he went in before the Lord?

There is something implied there which is made explicit in another place in the Bible: in 2 Corinthians 3, Paul tells us that the reason Moses covered his face was because he didn’t want the people to know that the glow was fading away…

In other words, Moses hid behind the veil in order to keep up an appearance before the people, that wasn’t really true. Moses didn’t want people to know that he was just like them. He liked having people look up to him and be in awe of him, so he hid his face, lest everyone see that the glory was fading.

It was a facade.

That’s what a veil is: it’s something you hide behind. It’s a kind of mask that you use to cover up your blemishes, lest people see the real things about you that might change their image of you.

As a pastor, I see this a lot.

There are many examples of this today, in our own culture. Oftentimes people are willing to help other people deal with their “messiness,” but they don’t want anyone to know about the messy things in their lives. People tend to be quick to offer help, but reticent to admitting that they need help, or accepting help when it’s offered. They’d rather keep up a facade that they’ve got their stuff together, that their face glows with the glory of the Lord, even when that’s not the case.

Veils hinder true fellowship and community. Facades can hinder people from getting help when they need it. If your curtains are on fire, but you don’t want to call the fire department, lest your neighbors see that there was a problem at your house, then the fire will spread until the entire house burns down. All too often, that’s exactly what happens.

If your curtains are on fire, but you don’t want to call the fire department, lest your neighbors see that there was a problem at your house, then the fire will spread until the entire house burns down.

Furthermore, when leaders put up a facade, like Moses did, that things are better than they actually are, or that they are more spiritual than they actually are, it creates a culture which encourages people to not be honest about where they are really at. I believe that people deserve to have leaders they can look up to, and that they should expect more from leaders: to be a leader means to be out in front; after all, how can you follow someone, unless they are a few steps ahead of you? However, it should be authentic and not contrived. What Moses did was contrived.

In Genesis 3, we read about the first time people tried to cover up their shame: Adam and Eve had been naked and unashamed until they rebelled against God, but when sin came into the world, they were overcome with a sense of shame, and they tried to hide it by covering themselves with leaves. Leaves are good for a lot of things, but they made terrible coverings. They’re itchy. They’re drafty. 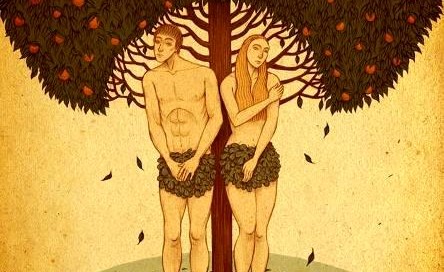 Here’s what God did: he said, “I will make a covering for you,” and he made them coverings of animal skins. Do you know how you get animal skins? By killing an animal. In other words: because of their sin, an innocent creature had to die, in order to cover their shame.

Are you picking up what the story is putting down? The only way for us to be covered, is by the death of another. That other, the ultimate covering for our sin and shame, was Jesus – the “lamb of God.”

Any of your attempts to cover yourself will be not only uncomfortable and drafty, they will be insufficient and unhelpful. Facades create unnecessary barriers which hinder fellowship and growth. Embrace the covering of Jesus, and pursue authenticity rather than facades in your relationships and in your spirituality!