A few years ago my thinking was shaped about the process of spiritual formation by James K.A. Smith‘s book, “Desiring the Kingdom.” In it, he explains the role that “liturgies,” not only ecclesial, but personal and “secular” liturgies play in that formation.

For more on that book and its ideas, see: Why Go to Church If You Already Know It All? Here’s Why

In “Desiring the Kingdom“, and Smith’s related book “You Are What You Love“, it is clear that he has been highly influenced by Augustine, particularly Augustine’s “Confessions”. The idea of sin as “disordered loves” is particularly Augustinian, as is much of what Smith says about formation, namely that idolatry is more “caught” than “taught”, i.e. idolatry is less of a conscious decision as much as a learned disposition. not so much conscious decisions to believe falsehood, and more like learned dispositions, which is why people’s idolatries often reflect their environments. Since we “practice our way into idolatry,” we need to “practice our way into freedom,” through liberating practices which direct our loves.

I was surprised and excited a few months ago when I saw that Smith was featured in an episode of the Art of Manliness podcast, in which he clearly articulated the Christian hope of the gospel while talking about his new book: “On the Road with Saint Augustine“.

In this book, Smith not only details his travels to retrace some of the footsteps of Augustine, who was originally from North Africa, but came to Italy seeking success and influence in the civic realm, only to have the course of his life changed by meeting Ambrose, the Bishop of Milan. As a result, Augustine later returned to North Africa where he became a bishop and influential Christian thinker, whose writings played a large part in the Reformation.

Augustine: the Father of Existentialism

Smith’s main point, however, is not to write a biography of Augustine, or a memoir of his travels, but to explain that Augustine is actually the father of modern existentialist thinking.

The great difference, of course, which Smith is eager to point out, is that whereas the modern and post-modern existentialists (like Kerouac in his novel “On the Road”) like to describe “the road” as “home”, and assert that there is no ultimate destination to which the road is leading (i.e. it is only the journey itself which matters, not the destination) – this is not at all what Augustine taught or believed. Augustine asserted that life is a journey with a destination, and it is only in light of this destination that there can be joy and purpose in the journey. Augustine taught that there is indeed a true “home” which awaits us, the “home” that all of us long for and the search for which underlies all of our pursuits and endeavors; thus, “the road” itself is not “home”, and if we expect it to be, our lives will miss the purpose, meaning and significance they are meant to have.

Why you hated the ending of Lost

If you were one of the many people frustrated by the ending of the show Lost a few years back, here’s why it was so frustrating: the ending of Lost was the epitome of post-modern existentialist thinking, which says that it is the only thing that matters in the end is not getting all of your questions answered or understanding the meaning of things, but only the enjoyment of the journey.

The ending scene in which all of the characters come together in the future and hug each other, without answering the many unanswered questions that were posed on and with the island, is meant to communicate the idea that, with these characters, the viewers of the show had enjoyed 6 years of excitement, mystery, and community. These things, the ending insinuated, were the reward and the ultimate purpose, not having all the questions answered.

The ending of Lost was famously frustrating for dedicated viewers. Why? Because built into us (existentially!) is the understanding that there must be a destination, there must by a purpose, there must be a “home” – and that all of our seeking is not actually in vain, but our lives do have a purpose and what we long for does indeed exist.

This is the promise of the entire Bible – from Genesis all the way through Revelation. It is through Jesus Christ that God has provided the way “home” – and it is through Him that we will truly experience the meaning of our existence. This is what Augustine articulated so clearly and compellingly, and yet the modern and post-modern existentialists, while taking elements and motifs of his teachings, missed the ultimate point of both what Augustine taught and life itself.

In this book, Smith helpfully disseminates some core elements of Augustine’s teachings and connects them to the modern person’s hopes, fears, and dreams in a way that is helpful and hopeful, as he points us to Jesus as the answer to the great riddles.

I thoroughly enjoyed it, and I hope you will too! 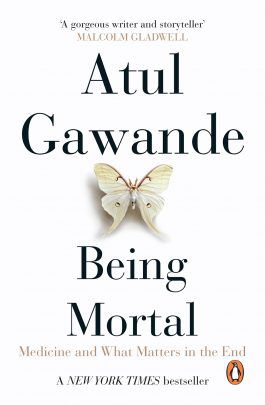 I recently finished Atul Gawande’s book Being Mortal. It was given to me by a friend from church who recommended I read it, and I’m glad I did.

The Author and his beliefs

Atul Gawande is an American medical doctor, the son of two doctors who immigrated to the U.S. from India. He was raised nominally Hindu, but by his own admission he is functionally secular and non-religious, and the focus of his book is not at all on giving hope beyond this life, only on dealing with the death from a clinical perspective.

However, I would argue that whatever you believe about the future invariably affects the way you interpret the meaning and purpose of life, as well as how you cope with mortality, and this does come through in some of his conclusions.

The book begins with a description of physical changes that happen as people age, beginning at age 35.

Next, Atul Gawande gives a brief history of nursing homes. I found this part very interesting. About 50% of Americans die in nursing homes. Some might say this is very sad, which in some ways it is – however, understanding the way that most people died in the past makes you see that this is actually a great improvement over 100 years ago, when many people died in state-funded “poor houses” which even at their best had awful conditions.

He then goes on to describe the development of “assisted living” facilities, and how many have now deviated from their original purpose and design. He also tells stories of people who have sought to improve these facilities through innovation, such as bringing living things, e.g. plants, animals and children into these homes to improve residents’ quality of life.

While the author does say that the older model of a multi-generational home in which elderly people are cared for at home until they die has some benefits, he also shows its limits and downsides, using his own grandfather as an example.

Even though palliative care has been shown to help improve and often prolong a person’s life, one of the sad things Gawande points out is that many insurance providers have stopped paying for palliative care, but they continue paying for invasive treatments, even if they are unnecessary or unhelpful to patients. This perpetuates a cycle of doing everything possible for patients, even if those treatments are not likely to lengthen their life and will probably make their quality of life worse.

Atul Gawande’s main point is summed up in this statement:

“Over and over, we in medicine inflict deep gouges at the end of people’s lives and then stand oblivious to the harm done.”

He argues that as people live longer and more die of old age, we should be focused on helping people stay in control of their lives as long as possible, achieve their goals, and die with dignity.

A Reason for Living

It is impossible to talk about dying without some sort of existential discussion about what gives life meaning and purpose.

At one point, Atul Gawande references the Harvard philosopher Josiah Royce, who said that “simply existing – merely being housed and fed and safe and alive – seems empty and meaningless to us.” He goes on to explain that we all seek a cause beyond ourselves, and it is in ascribing value to the cause and seeing it as worth sacrificing for, that gives our lives meaning.

Royce said that this reason for living was the opposite of individualism. An individualist puts self-interest first, seeing his or her own pain, pleasure and existence as their greatest concern. For the individualist, self-sacrifice makes no sense, but since their own self is the highest cause for which they live, their life has no meaning other than to make themselves happy. Ironically, it is for this reason that happiness and satisfaction will always elude them. For the individualist death is meaningless and ultimately terrifying.

It is for this reason, Gawande explains, that we all need something beyond ourselves and outside of ourselves to live for, and this is why elderly people who have pets, for example, tend to live longer lives.

The problem with Gawande’s search for meaning

The problem with Gawande’s search for meaning, is that he has identified a real need, and yet he basically says in the end that since he doesn’t believe there is anything beyond this life, therefore it is better to give someone the illusion that their life has meaning and purpose and value beyond themselves, even though no such thing really exists.

He does mention that people want their lives to make a difference after they are gone, but what he fails to answer is: to what end?  Why should anyone care about what happens after they are gone, if life is actually meaningless, and after this light burns out there is only darkness? From this same logic, a totally selfish existentialism could also be argued for – such as that of the Epicureans: “Let us eat and drink, for tomorrow we die!” – in other words #YOLO – since we only live once, who cares what destruction we leave in our wake for others to deal with?! It’ll be their problem, not ours!

The solution which only the gospel gives

It is only the gospel which gives us real hope beyond this life, and a real mission in this life which has more than just illusionary results. In the gospel we have hope for life beyond this one, and the effects of our mission are eternal in nature.

As CS Lewis put it at the end of the Chronicles of Narnia:

“For us, this is the end of all the stories…but for them it was only the beginning of the real story. All their life in this world and all their adventures in Narnia had only been the cover and the title page: now at last they were beginning Chapter One of the Great Story which no one on earth has read: which goes on for ever: in which every chapter is better than the one before.” – CS Lewis, The Last Battle

In order to truly “die well”, what we need is not just dignity, but HOPE. And this is found only and ultimately in the gospel message of Jesus Christ.

Should you read it?

I would recommend Atul Gawande’s Being Mortal. It was full of important thoughts about the process of dying in Western society today. However, I recommend reading the book with an eye to its one glaring shortcoming: it fails to address the need for and the source of HOPE both for this life and the one to come.