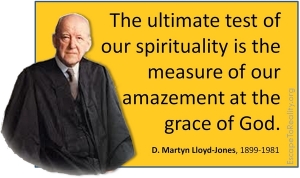 Recently I have been reading a book about Martyn Lloyd-Jones and the influence of his preaching. What I find most interesting is how relevant his approach to preaching is to our day. Here are a excerpts from the book to help you see what I mean:

Martyn Lloyd-Jones began his ministry in a time when biblical preaching was considered irrelevant. The common thought of the day was that people are not interested in nor have the ability to handle anything but short “homilies” or “sermonettes”. Churches around the UK were in decline and it was thought that things such as clubs, activities and entertainment were needed to attract people to churches. Martyn Lloyd-Jones did not agree with this; he felt that the greatest need in the church was for strong, biblical, doctrinal preaching.

“Amidst the spiritual decline in post WWII England, this gifted expositor stood virtually alone in his commitment to biblical preaching.”

Having grown up in church (Calvinist Methodist {I didn’t even know there was such a thing!}), Martyn Lloyd-Jones claimed that he was only truly converted at age 25. He later described this turning point in his life:

“For many years I thought I was a Christian, when in fact I was not. It was only later that I came to see that I had no inner Christian, and became one. What I needed was preaching that would convict me of sin, but I never heard this. The preaching we had was always based on the assumption that we were all Christians.”

This experience had a profound impact on the way he preached later on in his ministry; he was always doing the work of an evangelist, because he knew what it was to be in church but not be in Christ.

Martyn Lloyd-Jones’ definition of good preaching was: theology coming through a man who is on fire.

Preaching, he believed, was God’s method, the primary means by which scripture is to be made known.

In this way, Lloyd-Jones stood with the Reformers and Puritans who insisted that preaching is the chief means by which the grace of God is administered to the church.

Hughes Olifant Old, one of the foremost experts on the history of preaching, states,

“the greatest impact of Lloyd-Jones on the English-speaking pulpit of today is the recovery of expository preaching.”

The attitudes and trends which characterized the times in which Martyn Lloyd-Jones began his ministry seem very similar to those of today. Thus, he stands as an example of a different, and may I say: better way.

“The hour is upon us for faithful men of God to step into pulpits around the world and preach the Word. The need has never been greater. In a day that clamours for churches to captitulate to the spirit of the age and use entertainment in order to draw crowds, the primacy of biblical preaching must be restored wherever the people of God gather to worship. As it was the need in the time of Lloyd-Jones, so it remains the need today for preachers to herald the Word in the power of the Holy Spirit in order to feed the flock and evangelize.”