I like to joke that as a pastor I only work one day a week, but the truth is that on average most pastors work 50-60 hours a week. This time is spent managing, planning, corresponding – and of course: studying and preparing a sermon.

Sermon preparation can take a lot of time, especially for a perfectionist. I know that I have often certainly spent an inordinate amount of time preparing my sermons before; partly because I consider it a high and holy calling to preach and teach the Word of God, and also because it is something I enjoy doing and I want to do it well, in a way that truly honors God and impacts peoples’ lives.

So how much time should a preacher spend on preparing a sermon?

I heard one well-known pastor say once at a conference that he only spent about four hours per week preparing his message. He then added that this is because he has a team of people who do all of his research for him, and he takes the material they bring him and organizes it into a message. Most pastors don’t have this luxury, nor would they want someone else doing their studying for them.

A friend of mine who pastors a small church told me that he spends 30 hours per week preparing for his Sunday message. He also has a midweek service, for which he prepares about 15 hours. The result of that is that he doesn’t have time for anything else except sermon preparation. In other words: he doesn’t have any time left over to be a pastor (Greek for “shepherd”) to his congregation. He is only a preacher. Particularly in smaller congregations, it is important that a pastor not only be a preacher, but a shepherd, and he and I both agreed that his time allocation in this area was more of a detriment than a blessing to his congregation.

As for myself, in addition to my regular duties as a pastor, I have a wife and young children who I like spending time with, and in the past few months I have taken on hosting a live radio show once a week and I’m studying for my Masters, which requires about 16 hours of my attention every week. All this means that I need to be good at managing my time well, not only for my own benefit, but for the benefit of my family and my church. 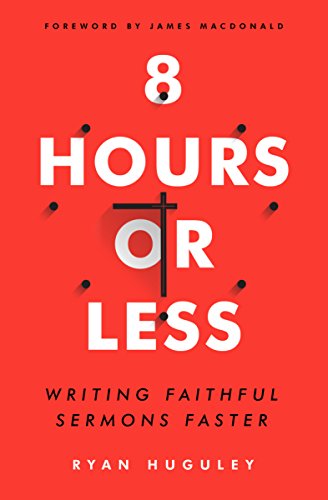 So I was intrigued a few weeks ago when a friend recommended this book: 8 Hours or Less: Writing Faithful Sermons Faster by Ryan Huguley.  It sounded a bit gimmicky to me at first, but after reading it, I think it’s a great resource that I would recommend. Basically, in the book, he outlines a plan for your week, which has you doing certain tasks each day for an hour or two, which help you focus and write better sermons faster. I think that’s really key; it’s not hard to write sermons faster – the question is if they will be good sermons. The system he lays out is intended not only to improve the speed, but also the quality of sermons.

One part which was foreign to me is that on Tuesdays he has you study the text and review your outline with a small group of people. This is probably the part I was most hesitant about, but the part which I have enjoyed the most.

If the end result is better sermons and more time for a pastor to spend pastoring people,  leading the church and preparing for the future, and having more time for their families, that’s a win-win-win. I recommend this book whole-heartedly.

8 thoughts on “How Much Time Should a Pastor Spend Preparing a Sermon?”