I took my son to the store on Sunday night to buy some trading cards for a game he plays. As we were walking around the store, a book caught my eye. 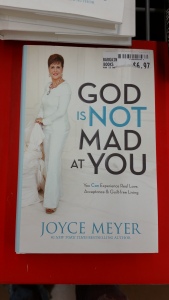 The title: “God is Not Mad at You.” To be fair, I haven’t read this book, however, I did take the time to go and read some reviews of it online to see if my initial assumptions about the message of this book would turn out to be mistaken. It would seem from these reviews that they were not.

Here’s the thing: the author is correct, God is not mad at you…that is unless, of course, He is.

What do I mean?  What I mean is that God is mad at some people – and rightly so! The Bible makes it very clear that God “opposes” some people, and that God considers some people “enemies.”  In fact, “the wrath of God is revealed from heaven against all ungodliness and unrighteousness of men” (Romans 1:18) and the objects of His wrath are in fact people (Ephesians 2:1-3)!

Here’s the thing: it’s easy for us to say, “Well, yeah, okay, I get what you’re saying: God is mad at the bad guys who do bad things. That makes sense… But aside from those guys, who need to know that what they are doing is wrong and that divine justice is promised, the rest of us need to be comforted and encouraged that God isn’t mad at us – after all, most of us aren’t that bad.”

The question is: who defines “bad”? And how bad do you have to be to be “bad.”  The Bible says this: “For whoever keeps the whole law and yet stumbles at just one point is guilty of breaking all of it.” (James 2:10) Furthermore, Jesus taught in the Sermon on the Mount and the Bible says elsewhere that “all have sinned and fallen short of the glory of God” and that “there is none who is good, no not one.”

What this all means that you and I are more sinful than we even realize, and therefore more deserving of God’s wrath than we even know.

But here’s the message of the Gospel: it’s not that you are a good person and therefore God isn’t mad at you – it’s that God LOVES you in spite of your sins and failures and shortcomings so much that He sent Jesus, the Divine Son, to die in your place, and absorb the wrath which you deserved.

What that means is that if you are in Christ, then indeed God is not mad at you – because Jesus became the “propitiation for our sins” (1 John 2:2), which means that he absorbed not only the legal judgment for our sins, but the righteous anger of God toward our sin.

If you are in Christ, then indeed: the message of the Gospel is that God is not mad at you

However, if you are not in Christ, then the Bible says that you are still in your sins. Jesus himself said this: “Unless you believe that I am He (the Messiah, the Savior), you will die in your sins.” (John 8:24). And if you are still in your sins, then the wrath of God remains on you!  Again, Jesus himself said this very thing: “Whoever believes in the Son has eternal life, but whoever rejects the Son will not see life, for God’s wrath remains on them.” (John 3:36)

Whoever believes in the Son has eternal life, but whoever rejects the Son will not see life, for God’s wrath remains on them. – JESUS (John 3:36)

Here’s the point: God is not mad at you IF you are in Christ, because God’s wrath was poured out on Him in place of you – the undeserving in place of the deserving.  Apart from Jesus, however, there is no such promise and no such hope.

The reason I take issue with this book is because it declares something to all people as a blanket statement, a broad generalization, which does indeed apply to some, but only some! To others, therefore, it gives a false sense of comfort and security, which actually does them a disservice.

The false prophets in the day of Jeremiah did the same thing. God had called Jeremiah to call the people of Judah to radical repentance, to turn away from sin and wickedness and turn with their whole hearts to God, and if they did that they would experience blessing. Jeremiah preached this message, which turned out to be radically unpopular, despite the fact that it was from God.  At the same time, another group of prophets came with a message which was wildly popular, despite the fact that it wasn’t from God! Their message? “Don’t worry; be happy. God’s not mad at you. God just wants you to be happy, so just do your thing and don’t bother yourself with feelings of guilt or needing to repent.” About these false prophets, God said:  “They dress the wound of my people as though it were not serious. ‘Peace, peace,’ they say, when there is no peace.” (Jeremiah 6:14)

“They dress the wound of my people as though it were not serious. ‘Peace, peace,’ they say, when there is no peace.” (Jeremiah 6:14)

The message of the Gospel is that Jesus died on the cross, so that God could end sin without ending us.

No matter who you are or what you’ve done, that is how much God loves you. If you are in Christ, if you have put your faith in Jesus as your Savior, as your righteousness, as the propitiation for your sins and as your Redeemer – then indeed, take comfort: God is not mad at you!

2 thoughts on “God is Not Mad at You…unless He is.”