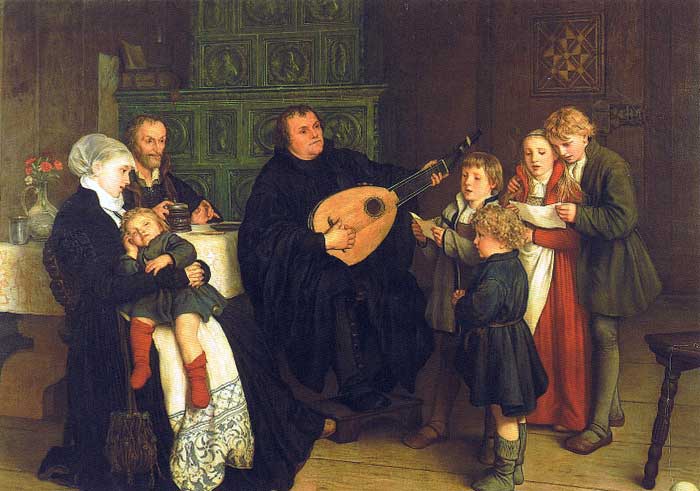 One of Luther’s great contributions to Christianity was that he pointed out that much of the common thinking about Christian living and attitudes comes from Plato and Aristotle, rather than from the Bible.

Plato, for example, was a dualist – who viewed the physical world as inherently bad, and the unseen spiritual world as inherently good. Therefore, Plato taught that physical pleasure should be avoided; it was better to live a life of suffering and eschew pleasure in order to be more spiritual. This thinking worked its way into Christianity, to the point where things intended by God to be blessings for our enjoyment were rejected and forbidden. One such area was music.

Augustine of Hippo had written about music in the 5th century, stating that he was “troubled in conscience whenever he caught himself delighting in music.” Luther, who greatly looked up to Augustine, responded by saying: “I have no use for cranks who despise music, because it is a gift of God.” He went on to say, “Next after theology I give to music the highest place and the greatest honor,” and “next to the Word of God only music deserves to be extolled as the mistress and governess of the feelings of the human heart.”

“Next after theology I give to music the highest place and the greatest honor.”

“Next to the Word of God only music deserves to be extolled as the mistress and governess of the feelings of the human heart.”

Luther is the one who introduced, or at least re-introduced congregational singing to the church. It may be hard to imagine, but until Luther brought singing to the church, there had been no such thing for at least several hundred years, if not more. Furthermore, the fact that there is congregational singing in Catholic churches today is directly because of Luther, and most hymns sung in the Roman Catholic Church today were written by Protestants.

Luther also believed that music was a great tool for teaching spiritual truths. He wanted to put good doctrine into congregational songs to reinforce the teaching that was coming from the pulpit. Luther wrote many hymns himself, but he also reached out to others for help. In a letter to his friend Georg Spalatin in 1523, Luther wrote:

Our plan is to follow the example of the prophets and the ancient fathers of the church and to compose songs for the people in the vernacular, that is: spiritual songs so the Word of God may be among the people also in the form of music. Therefore we are searching everywhere for poets. Since you are endowed with a wealth of knowledge and elegance in the German language, and since you have polished it through much use, I ask you to work with us in this project.

I would like you to avoid any new words or the language used at court. In order to be understood by the people, only the simplest and most common words should be used for singing; at the same time, however, they should be pure and apt; and further, the sense should be clear and as close as possible to the [Bible]. You need a free hand here; maintain the sense, but don’t cling to the words; [rather] translate them with other appropriate words.

Martin Luther not only introduced music back into the church, but he defined the parameters of what makes for good Christian church music.

3 thoughts on “Martin Luther on Music and Song Writing”