This morning I officiated a wedding, and as I usually do, I had all my notes on my iPad, which is attached to a mic stand by an iKlip2. It's a really great solution, because it leaves my hands free – which is nice for me, because I talk with my hands a lot, but also nice when officiating weddings, for things like handling the rings, etc. 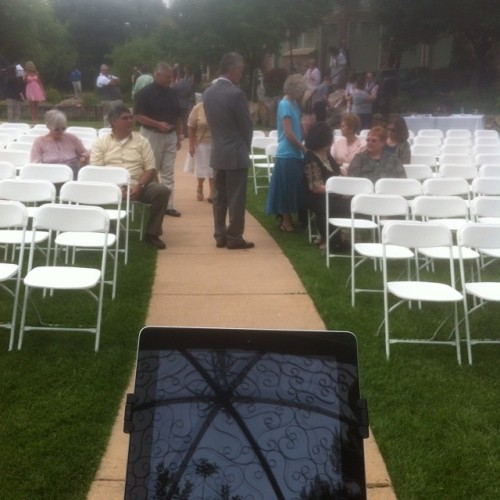 But here's what happened to me today: It was an outdoor wedding that started at 11:30 – it was a bit overcast, but about 80 degrees out. And as soon as the wedding started, I noticed that my iPad was started to get hot – like really hot!

And then I started to worry… because I know what happens when the iPad gets hot – and it has happened to me before… It shuts off and won't come back on until it cools down.

At one point, I was convinced that my iPad was about to shut off – and I started praying… and thinking: what do I do if this thing shuts off? I mean, it's one thing if it happens at church – I can probably preach without it, but not at a wedding! They had written their own vows, and I hadn't memorized anything…

At one point, the bride and groom did a symbolic act together, so I took the chance to turn off the screen on my iPad, hoping that would give it the chance to cool down a little. But as soon as I turned off the screen, I started thinking: Oh no…what if, now that I've turned it off, it won't turn back on?!?!

I started praying, and asking God to have mercy on me for being so dumb as to not give myself any back up in case of an emergency like this.

God was merciful, and I was able to finish the wedding from my red-hot tablet without it shutting off.

But I learned an important lesson that I want to pass on to anyone out there who might benefit from it: If you speak outside from your iPad, especially for a special event like a wedding, ALWAYS have a set of printed notes that you can fall back on in case of emergency.

I realize now how many opportunities there might have been for something to go wrong with the iPad, from getting knocked over on the stand and breaking, to rain – not to mention the glare, which made it almost unusable anyway.

I learned my lesson today, and I'm thankful that God was gracious to me (and the bride and groom) and didn't make me learn it the really hard way.

One thought on “Pastor Tip: Preaching Outside from an iPad”