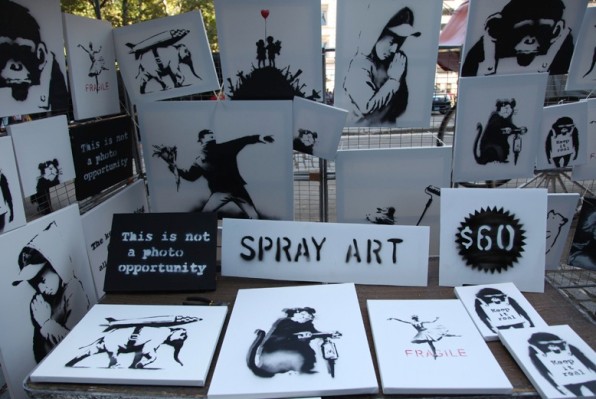 Did you know that a few years ago, the British artist Banksy set up a stall at the edge of New York’s Central Park, and offered some of his most famous and sought-after works of art up for ridiculously low prices?

Some of Banksy’s most famous pieces, the monkey with a sign, the guy throwing flowers, the rat with a smirk, they were all there – but people walked by and completely ignored them.

Pieces which are worth hundreds of thousands of dollars were on sale for $60 a piece, and yet, over the course of the day, only three people bought prints from the old man watching over the stall, which was only labeled “Spray Art.”

One lady bought two pieces, but only after haggling for a 50% discount. One young woman bought a large canvas at full price, and one lucky man from Chicago bought four of them for his new house, because he just wanted “something for the walls,” and he thought these would suffice.

All in all, Banksy sold $225,000 of art for just $420. The entire stall was holding over $1 million worth of art, but no one recognized the incredible value of what they were walking right past.

Here’s an article about it, and below is a video which was taken of the stunt as it happened.

Or maybe you’ve heard about the world famous violinist, Joshua Bell, who, two days after selling out a theater in Boston where the average seat price was over $100, entered a Washington D.C. metro station and played one of the most intricate pieces ever written, on a violin worth $3.5 million. In 45 minutes, he made $32 in tips, and of the thousands of people who walked by, only six stopped to listen.

Here’s an article and a video of that.

“From now on therefore…”

How many times do we do the same thing? We overlook the treasure that is right before us, because it is in a place we didn’t expect to find it.

The Apostle Paul says in 2 Corinthians 5:16: “From no on therefore, we will regard no one according to the flesh.”

He is making a determination, that he will not look at people the same way anymore. Why not? Because in the prior verses, he talked about how Jesus has died to redeem us. Not everyone will receive that gift of redemption; Paul mentions that when he talks about how, in light of what God has done, we now seek to compel and persuade others to look to Jesus and receive God’s grace freely offered to them, as if God as making his appeal through us: we implore you on behalf of Christ, be reconciled to God! (2 Corinthians 5:11,20)

CS Lewis put it this way:

There are no ordinary people. You have never talked to a mere mortal. Nations, cultures, arts, civilizations – these are mortal, and their life is to ours as the life of a gnat. But it is immortals whom we joke with, work with, marry, snub and exploit – immortal horrors or everlasting splendors.
(CS Lewis, The Weight of Glory)

Beyond just the fact that no human you ever encounter is a mere moral, Paul tells us something even more astounding: that for those of us who have received this gift of redemption and new life in Christ, God has placed the light of his glory within us – as if someone put a great treasure in a simple clay pot… or if Banksy set up a stall in Central Park, or if the greatest violinist in the world were playing in a subway station…

I know that I need to do this myself: to slow down and consider the treasure and the beauty of what (and who) is around me. I bet I’m not the only one 🙂

4 thoughts on “Treasure in Unexpected Places”