We had a great time taking church outside this past Sunday! 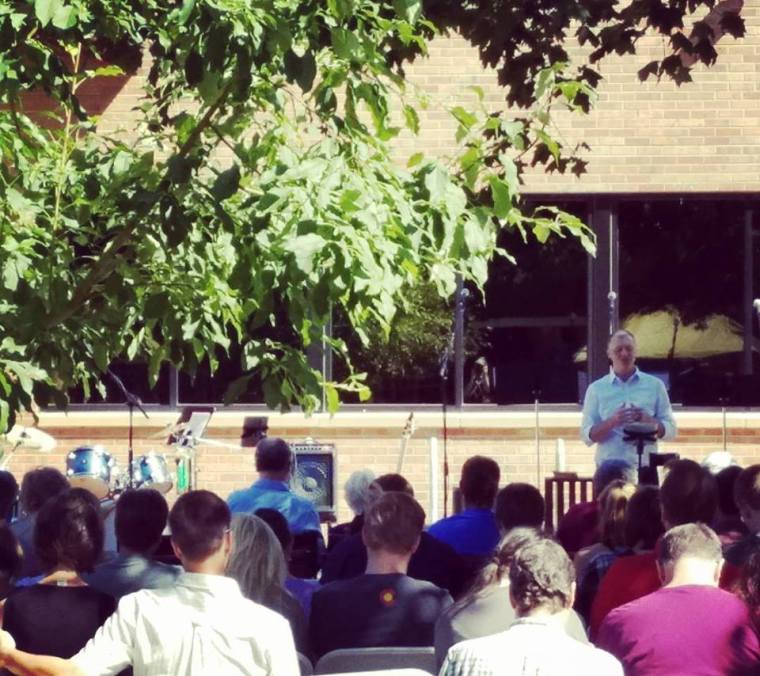 One of the things I heard was that people in the nearby buildings came out and listened to the worship and the sermon from their balconies.

Every Sunday we invite people at White Fields to text or tweet us abut the sermon as a way of interacting. Someone sent this text message in response to this past Sunday’s sermon from the Church Matters series on the topic of the gospel:

Could you please share with me what you said about racism in the sermon today? I had never heard it put that way, and I found it very insightful.

It was during the section where I was talking about what the gospel does, that it gives you a new status before God.

Here’s that text from my notes:

That kind of attitude leads to things like racism, prejudice and condescension.

This is where many people find their identity: in looking at other people and convincing themselves that they are superior for whatever reason.

But when you understand the gospel, you no longer have the need to prove yourself, to justify yourself or try to build an identity or a resume by which to make yourself acceptable. Because the message of the gospel is that God has justified you in Christ, and in Him, He has given you an identity and has accepted you. When you understand that on your own merits, you are completely bankrupt before God, and yet God loves you with a greater love than you could have ever dreamed of — not because you earned it or deserved it, but simply because of who HE is and because HE loves you — and through Jesus, He acted to make you His own, and to transform you into His child!

When you really understand the Gospel, it makes you, on the one hand, incredibly HUMBLE (because you recognize that you aren’t actually any better than anyone else) — and at the same time it makes you incredibly CONFIDENT! (Because you know that you are completely loved and accepted by the one being in the universe whose opinion really matters! Because in Christ, God looks at you and says: You are my child, in whom I am well pleased.

And therefore, the gospel enables you to be incredibly confident — without being the least bit condescending towards others, because you no longer derive your value and worth from being better than other people, but from God’s love for you and the identity He has given you in Christ.

I actually wrote this before the events that took place on Saturday in Charlottesville, VA. I am deeply grieved by what happened there and my heart goes out to the family of Heather Heyer, the woman who died, as well as to the people who were injured and their families.

We saw this very thing in our recent study of Jonah. Jonah was racist, and he assumed that God shared his views, and he was shocked to find out that God did not. Jonah’s problem was not ignorance; it was a heart issue! He did not share the heart of God, which was love for all people of all nations.

Racism is a sin which the gospel reveals and heals. Racism, as I said on Sunday, is a means of self-justification. Racism is completely incompatible with Christianity. God loves the world, and so should we. Jesus died to save people of every tribe, tongue and nation and to make them all ONE in Him.

2 thoughts on “Racism is Not Merely a Matter of Ignorance”